South Korea is the latest country to introduce its first bitcoin ATM. Not only is the machine produced locally by a home-grown company, it is also two-way, meaning users can also sell bitcoins and withdraw cash.

The machine, which officially began operating yesterday, sits in the Coffee Sedona cafe in one of Seoul's largest shopping malls, the Coex Mall which is also close to the Coex Intercontinental Hotel and a casino in the city's world famous Gangnam district. For those wanting to buy bitcoins, it accepts cash (note: the card slot on the machine is a dummy slot, normally used for non-bitcoin ATMs).

It is the result of a joint venture between bitcoin exchange Coinplug and Nautilus Hyosung, the number one 'regular' ATM manufacturer in Korea, which also has the world's fourth-largest market share. Coinplug's Richard Yun said the machine's launch was well attended by the Korean media.

This video (in Korean) demonstrates how transactions are made in both directions using a smartphone wallet.

The machine also has one other key feature, or lack thereof: unlike other two-way bitcoin ATMs, such as the one produced by US company Robocoin, the Coinplug machine does not collect any identification or biometric information from users. Robocoin, as what it calls a security feature, requires photo ID and takes a palm vein scan of users, although the company says this information is not uploaded to a database anywhere and that palm vein scans function like a secondary PIN, representing the "most anonymous biometric on the market".

Coinplug's machine does have some restrictions of its own, though. Yun said the machine is set to allow transactions at a maximum of (the equivalent of) $200 each, and a maximum of three transactions a day per wallet address. This is less than what is typically allowed by Korean banks for ATM transactions, which is $1,000 per transaction and $6,000 per day.

Other popular bitcoin ATM options, like the machines produced by Lamassu, accept cash and dispense bitcoins only. 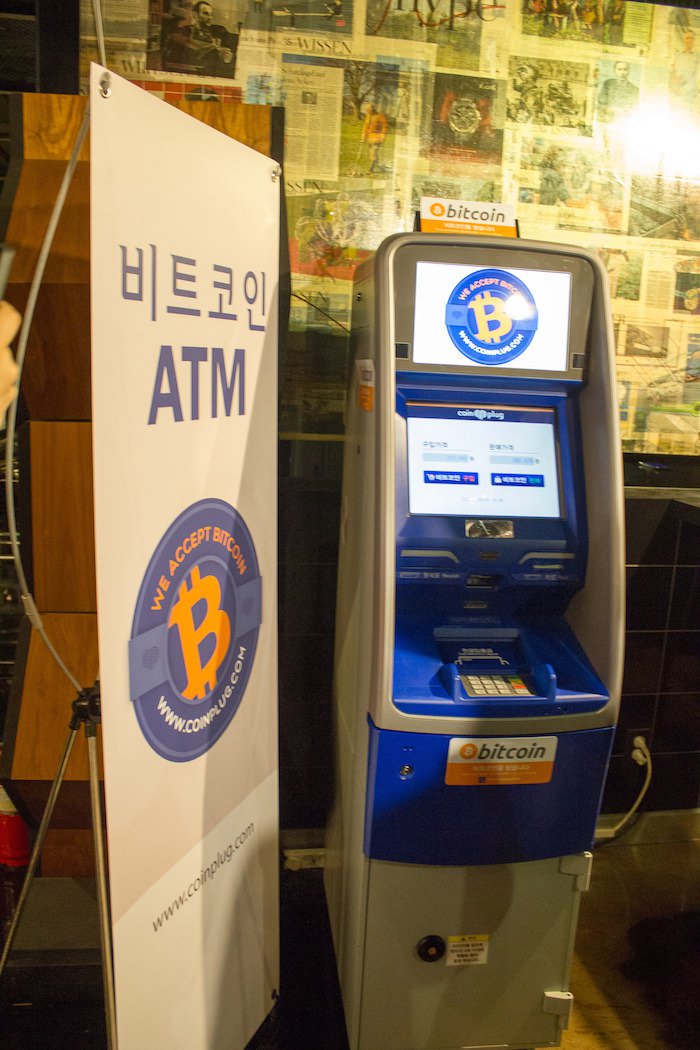 Yun said the company was able to produce a two-way machine thanks mainly to the South Korean government's light touch approach to bitcoin regulation so far. The government, like many others, has declared bitcoin is not a currency and will not regulate it, and has not made any attempts to restrict its use. Should the machine prove successful in its homeland, Coinplug will be looking for interested buyers outside Korea.

Coinplug has been busy in Korea this year, recently launching three separate Android bitcoin apps for merchants and traders, and a wallet app for everyday users. The company has also been funded so far 50% each in bitcoin and fiat currency by its Silicon Valley-based partner, new venture capital firm Silverblue.