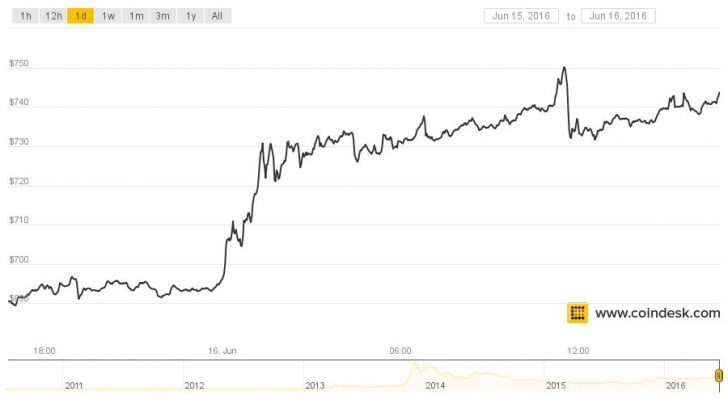 The price of bitcoin broke $750 today, building on recent gains to hit a 28-month high.

Bitcoin prices reached $750.37 during the day's session, the highest since 7th February, 2014, CoinDesk USD Bitcoin Price Index (BPI) figures reveal. The digital currency exceeded its latest milestone of $750 after surpassing $700 early on 13th June, and then nearing $720 later that day.

Of late, bitcoin has benefited from a multitude of factors, including concerns about China’s economy, anticipation surrounding the upcoming halving and fear of a Brexit, and this momentum is showing signs it is continuing to build.

The digital currency suffered a notable drop on 14th June, falling more than 8% and coming within a few percentage points of a correction. While such a decline might have prompted concerns it had become overvalued, the digital currency’s recent gains support the position this was merely a temporary pullback.

Past that, the digital currency could easily benefit from the visibility that blockchain technology has been generating.

A wide range of market participants, central banks and other entities have been examining this distributed ledger’s potential uses, and as the technology draws more attention, it may draw mainstream traders to the nascent market.

While market experts have provided various explanations for bitcoin’s recent price appreciation, one variable they are pointing to as having key importance is the upcoming halving of network rewards.

Charles L. Bovaird II is a financial writer and consultant with strong knowledge of securities markets and investing concepts.