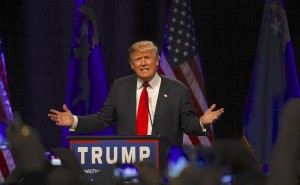 Global concern over the possible election of Donald Trump, along with other macroeconomic concerns, could lead to a massive jump in bitcoin transactions, according to a new report.

The digital currency that is increasingly being linked to spikes in price during times of economic instability would likely experience such a spike following a Trump election, Juniper Research has found.

In interview, research author Windsor Holden said that it was specifically Trump's "aggressive attitude" towards China and Mexico and "bellicose statement towards Muslims" that have him and some other economists concerned.

Holden, who is also Juniper’s head of forecasting, said that Trump’s "hostility to free trade" could lead to the imposition of tariffs and that his threats to ban Muslim’s from entering the US could serve as a recruiting tool for jihadists.

"Should these outcomes come to pass, then there will clearly be a substantial negative effect on numerous national economies, including the US itself. Hence, should it appear that a Trump Presidency is a distinct possibility, expect a marked uplift in the volume of bitcoin transaction(s) – and in the value of bitcoin itself."

A depreciation in the value of the yuan and uncertainly over Britain’s departure from the European Union are also both cited as reasons why bitcoin is increasingly being seen as a hedge investment.

That, coupled with the reduction in bitcoin supply as a result of the halving of bitcoin’s mining reward this month, could potentially lead to bitcoin transactions reaching $92bn this year, triple what it was at the year’s beginning, the report said.

In March, the Economist included Trump on its list of the Top 10 Global Risks published earlier this year, which was also included in the Juniper report.

Uncertainly in China and the impending exit of Britain from the EU were also named, and since its release, both China’s economic struggles and Britain’s departure from the EU have been connected with recent spikes in the price of bitcoin.

In addition to perceived global instability as a result of various socio-economic considerations, the Juniper report cites increased adoption as a factor.

Specifically, the report mentioned reduced cost of processing, reduced fraud risk, and the easy of cross-border transactions as factor in the increased adoption.

"Given bitcoin’s continued upward trajectory and the likelihood that this will continue prior to the halvening, we believe that for 2016 as a whole, transaction value is likely to be at or around 3.5 times that in 2015."

Source: Donald Trump Presidency Could Be a Boost to Bitcoin by Michael del Castillo