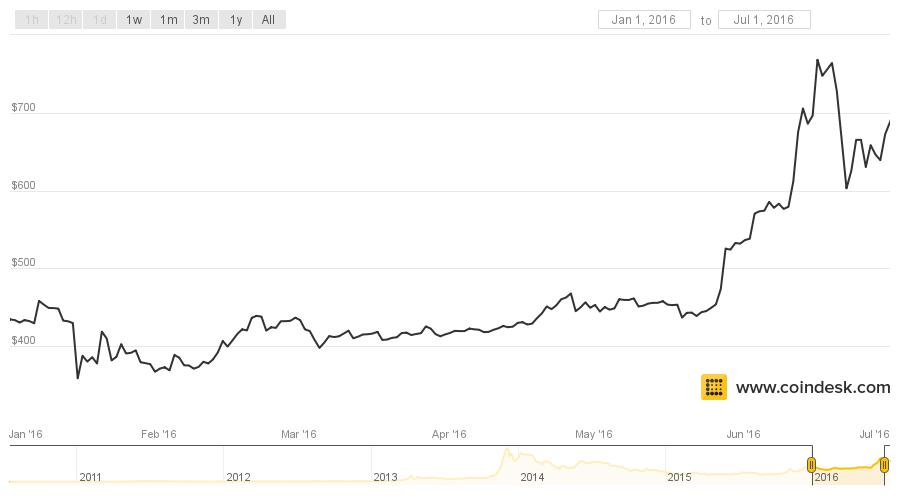 Bitcoin and ether prices both climbed during the first half of this year, as a number of factors – including rising adoption, yuan devaluation, the 'Brexit' and anticipation surrounding the halving of bitcoin's mining reward – helped the two digital currencies rise in value.

These developments fueled macroeconomic uncertainty, which analysts have identified as providing tailwinds to bitcoin prices. Amid this backdrop, the sentiment of bitcoin traders was positive, according to market data including long-short ratios and other measures of confidence.

While bitcoin prices climbed roughly 56% from 1st January to 1st July, according to the CoinDesk USD Bitcoin Price Index (BPI), this figure lagged behind the 63.8% increase enjoyed during the second half of 2015, and it fell far short of the 622.3% and 740.6% gains bitcoin experienced during the first and second halves of 2013, respectively.

The price fluctuations bitcoin enjoyed in the first six months of this year took place as market participants traded more than 450m BTC, according to Bitcoinity data gathered on 10th July. Chinese exchanges OKCoin and Huobi continued to dominate trading activity, as they accounted for more than 93% of all transactions.

Market sentiment was bullish during the period, as figures provided by full-service bitcoin trading platform Whaleclub show that 66% of positions were long.

Past that, confidence, meaning the percentage by which a particular day’s position sizes were larger than average, was 74% during the six-month time frame.

Bitcoin was not the only digital currency that enjoyed notable gains.

Ether’s price benefited greatly near the beginning of the year with the release of Homestead, the first "production version" of the platform, Arthur Hayes, CEO of bitcoin leveraged trading platform BitMEX, told CoinDesk.

The digital currency enjoyed tailwinds as a result of the ethereum development team delivering a working protocol. "As it became clear that Homestead would actually be released, the price began rising," said Hayes.

"Ether also benefitted from the bitcoin block size civil war during [the first half of 2016]," he stated. "As traders lost faith in the ability of bitcoin to evolve and function properly, they turned to ether."

But while ether started the year strong, it ran into some challenges later on when distributed organization The DAO, its most visible project, encountered a major security breach.

Since then, members of the ethereum community have been exploring different options for remedying the problem, though no solution seems to have gained a majority mindshare at this time.

There is evidence bitcoin is enjoying rising adoption along with its price, Joe Lee, founder of founder of derivatives trading platform Magnr, told CoinDesk.

In backing up his assertion, Lee pointed to transaction volume, price stability and a growing number of users.

"Our analysis shows that the rate of adoption of bitcoin is increasing,” he said. “We are seeing bitcoin's positive network effect increasing in strength as more people decide they want to try out digital currencies. This naturally increases the value to existing users both economically and fundamentally."

Past that, he described rising price stability as "a reflection of greater adoption".

Tim Enneking, chairman of cryptocurrency investment manager EAM, added further insight, emphasizing that while bitcoin was more esoteric when it first came into existence, it has been making inroads into the mainstream. The digital currency is receiving "more and more publicity," he stated.

Still, this sentiment is not without its challengers.

Tim Swanson, director of research for banking consortium R3, for example, has taken issue with the opaque nature of adoption numbers in the industry, and overall lack of visibility on key metrics.

One development that may have fueled the rising adoption of bitcoin is concerns about yuan devaluation.

The People’s Bank of China (PBOC) sharply devalued the Chinese yuan in August 2015. This move triggered bitcoin’s breakout, said Hayes, as the central bank kept reducing the value of China’s currency over the next 10 months.

Bitcoin benefited from “fears of Chinese savers that their purchasing power would drastically decrease,” he stated. Hayes added that “the PBOC began closing the easy ways through which capital leaves China.”

Another variable that analysts singled out as helping push bitcoin prices higher was the Brexit, when on 23rd June, British voters approved the UK’s departure from the 28-nation European Union.

While more than one expert has pointed to this event as affecting bitcoin prices, Enneking said that it had less of an effect than past macroeconomic events.

For instance, he indicated that events in Greece in 2015 and China in 2013 "paled in comparison" to price moves observed as a result of the Brexit.

In addition to yuan devaluation and the Brexit, one event that generated significant visibility during the first half of 2016 was the halving.

Bitcoin miners compete to create blocks in the blockchain by verifying transactions, and every time a miner generates one of these blocks, it receives a reward. Originally, that reward was 50 BTC, but that amount was cut to 25 BTC in 2012. On 9th July, however, the bitcoin reward was further reduced to 12.5 BTC.

Petar Zivkovski, director of operations for bitcoin trading platform Whaleclub, described the upcoming halving as "the great catalyst" behind bitcoin's rise this year.

Hayes also identified the halving as playing a key role in bitcoin’s more than 50% climb thus far in 2016.

He emphasized that even though the currency’s community has yet to solve the challenges for scaling the network, these difficulties have been "overshadowed" by trading activity ahead of the halving.

Amid this environment, bitcoin seems to be forging a new identity as a reliable safe-haven asset, but market observers provided varying predictions for where the price was likely to go next.

Zivkovski emphasized that while bitcoin has surged more than 50% in 2016, it faces many unresolved technical challenges, which could put pressure on the system through the end of the year.

"For those reasons, we see a mean reversion play out over the coming months as players look to cash in and late-coming bulls are flushed, with support in the $400s, at which point a pump and dump cycle may start once again,” he said.

Enneking offered a similar forecast, telling CoinDesk that “I think that bitcoin will fall back after the halving, but it will find support above $500.”

In contrast, Lee offered a rosier short-term prediction for the digital currency, stating that he expects bitcoin to finish 2016 at yearly highs of $800.

Note: All figures reflect data from 1st January to 30th June, a period that marks the first six months of 2016.

Source: Bitcoin Price Climbs Over 50% in First Half of 2016 by Charles Bovaird